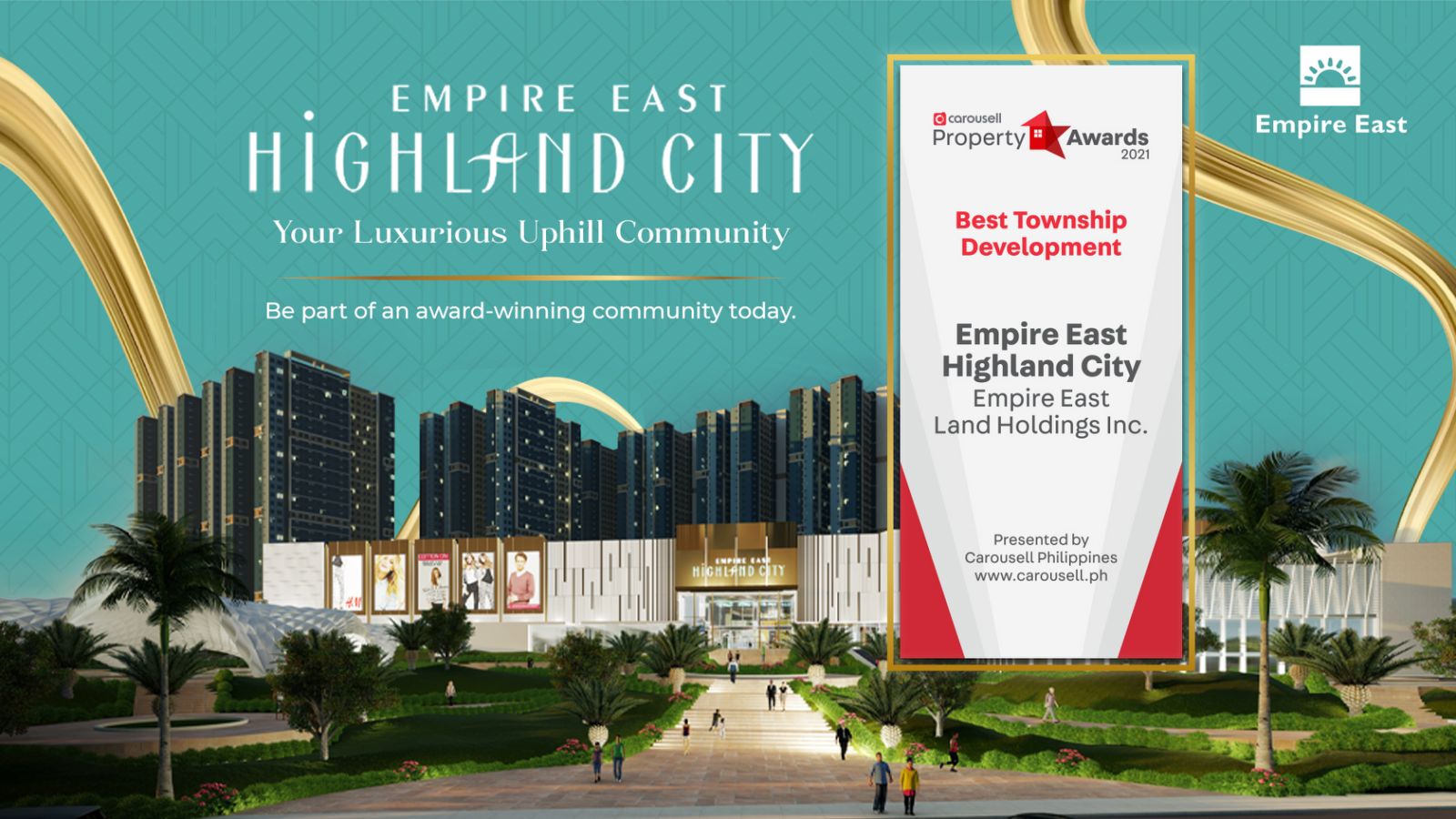 Developer and homebuilder Empire East Land Holdings, Inc., with its almost 28 years of expertise in building ‘affordably luxurious’ homes continues its legacy through its newest sustainable residential development in the East – the 37-tower Empire East Highland City set to rise on the 22-hectare terrain at the convergence of Pasig and Cainta, Rizal.

Planned and designed with its future residents’ convenience and comfort in mind, Empire East Highland City will raise urban living standards on the east side of Metro Manila, where future dwellers can bask in the majestic views of Antipolo and the Sierra Madre, away from the Metropolitan noise.

An Accessible Address that Addresses All Your Needs

Empire East Highland City is situated along Felix Avenue, formerly known as the Imelda Avenue, and is equidistant to two major thoroughfares– Marcos Highway and Ortigas Avenue Extension, connecting the township to the rest of Metro Manila.

Surrounding this upcoming township development are various lifestyle hubs and shopping malls like the Sta. Lucia Grand Mall and Robinsons Metro East– both located only a few steps away from the newest LRT-2 Marikina Station.

On this side of Empire East Highland City, future residents will have quick access to the hubs in Quezon City and top-notch schools and universities on Katipunan Avenue like the University of the Philippines, Miriam College, and Ateneo de Manila University. Other premier educational institutions in the ‘university belt’ are also within reach via the LRT Line 2,  making it a perfect home of choice for students and business professionals.

Meanwhile, on the other end of Empire East Highland City is Ortigas Avenue Extension, known as “Junction” by locals and commuters– the gateway from Metro Manila to Rizal and vice-versa.

Public transportation options like buses, jeepneys, and express vans connecting the residents to their workplaces around the Ortigas CBD, Eastwood, BGC, and Makati City are also easily accessible from the township.

Empire East Highland City’s location has now emerged as part of Metro Manila’s urban expansion, where there is a continuous growth of businesses and infrastructure developments. As a result, it has positioned itself as one of the most coveted addresses for aspiring homebuyers looking for expansion and business opportunities around the area.

Your Luxurious Uphill Community in a Safe and Secure Neighborhood

Every day is a grand welcome at Empire East Highland City. As you enter this luxurious uphill community, an expansive open greenery called the Highland Park elevated six meters from its main entrance on Felix Avenue will welcome you.

This 8,000-square meter open park will host retail areas, a 500-seater church, and vast gardens for family bonding activities where residents can also jog, walk, play with their pets, or simply sit on the greens.

An elegant stairway called the grand Spanish steps is located in the middle of the park, leading to the township’s Highland Mall, with 58,000 square meters of retail spaces. Future residents can dine, shop, and stroll from their condominium units to the Highland Mall with ease through the township’s clever design.

Future dwellers don’t have to worry about their safety as the township is equipped with CCTV cameras working 24/7 to ensure that their homes are safe from intruders day in and out.

Elevated Lifestyle in a Sustainable Community

Empire East Highland City is known for its unique on-stilts design. The residential towers built on stilts provide grandiose height from the ground level, evoking the feeling of living in an “elevated city.”

The 37 residential towers will serve as the development’s cinematic backdrop and reshape the Eastern Metro Manila’s skyline.

While the commercial zone has six-lane roads sloping towards higher grounds of the property, the residential area will have four lanes with spacious sidewalks that are at least two-meter wide.

Each unit is widely cut to ensure a spacious abode with enough space to breathe for air and natural sunlight to flow through the room of these high-rise towers.

Empire East Highland City, a sustainable township, allots 40% of the property for open spaces and greenery.

At the center of the 37 high-rise towers is the 6,700-square meter five-star sports club called The Chartered Club. This membership-only sports club will host top notch amenities and facilities like lap swimming pools, a fitness gym, basketball court, game room, event halls, and a cafe and lounge.

Earlier this year, Empire East unveiled the third tower of Empire East Highland City, following the successful and brisk sales of units from Arcadia Towers 1 and 2.

Empire East Highland City is open to the market for pre-selling. Aspiring homeowners can choose from a wide range of spacious units, including an Executive Studio ranging from 21.38 to 22.86 square meters, available for as low as P6,000* per month under Empire East’s extended Fuel Up Gear Up Promo until April 30, 2022, only. Meanwhile, there are also 1-to-2-Bedroom Suites starting at 29.38 to as big as 46.50 square meters, perfect for bigger families.

Be a part of this luxurious uphill community and elevate your lifestyle today! Inquire on the latest promos and flexible payment terms you can avail of by emailing inquiry@empire-east.com or leaving a private message on Empire East’s Facebook page.

You may also call or visit Empire East’s showroom located at 5/F of SM Megamall.