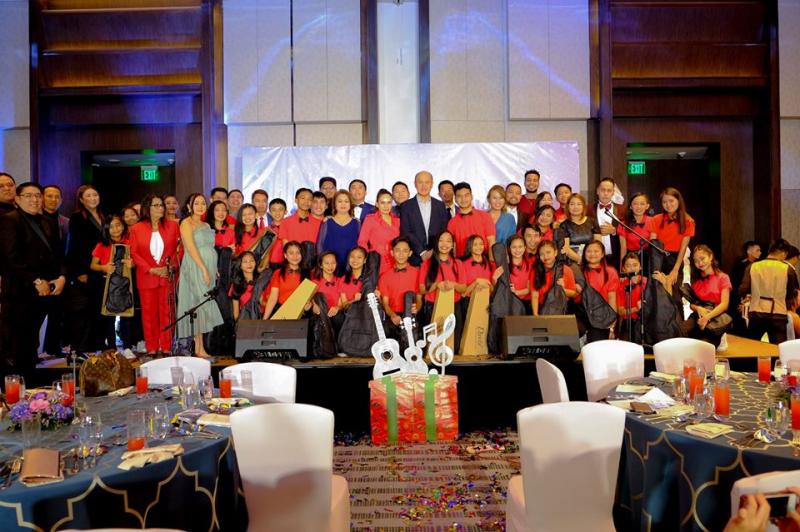 Event
-
Bounce Light to Give Back: Empire East Celebrates Christmas Through a Benefit and Thanksgiving Concert

Pasay City, METRO MANILA -- Empire East proved in its recent event that a Christmas party is more than playing fun games and unwrapping presents as it organized a Sales Benefit and Thanksgiving Concert titled PRISM, last December 9, 2019 at the Hilton Hotel Manila. This event celebrated the true essence of the holiday season through gift-giving and commemorating all the pocket Corporate Social Responsibility (CSR) projects initiated by the company's sales force this year.

The guest and beneficiary of the concert, Payatas Kids Choir, opened the program with a doxology followed by the Marketing Department’s dance number. Unlike its previous Christmas celebrations, Empire East organized a chorale competition to showcase the talents of the salespeople, while also paying a tribute to PKC as its special guest. Each team performed their rendition of a modern song and a Christmas hymn.

Twenty-one (21) sales divisions battled for the chorale competition championship. Everyone exerted their efforts into their colorful costumes, props, and festive get-ups. Before the announcement of winners, Empire East President and CEO, Atty. Anthony Charlemagne C. Yu, expressed his gratitude for the accomplished 33 CSR activities, exceeding the target of 25, in celebration of the company’s 25th year in the industry.

“The fact that God sent His Son to us to save us from our sins means everything; it is just right that we remind ourselves of the true essence of Christmas which is to give back, and I’m glad that we were able to do it through these pocket CSRs. Thank you so much for your help and support in making all of these possible.” -Atty. Anthony Charlemagne Yu

More than building homes, Empire East aims to fulfill its mission of giving hope to its neighboring communities through various CSR initiatives especially for the youth, the elderly and underprivileged families. This year, the company's sales teams and employees conducted various CSRs, all with different causes but for one unified goal: to share happiness and give back to communities.

Atty. Yu also presided the awarding and recognition of monthly top performers across all sales levels. Top Account Analysts, Senior Account Analysts, Account Managers, Associate Managing Directors, and Managing Directors received their trophies and gift certificates. Those who have been with the company for 5, 10, 15, and 20 years were also recognized. The highlight of the awarding ceremony was the President's Cup given to the overall annual top sellers, who earlier this year, were given an all-expense-paid trip to Japan.

As the attendees enjoyed a sumptuous buffet lunch, the Payatas Kids Choir serenaded them with a series of songs. This was followed by the gifting of musical instruments including 10 acoustic guitars and 20 concert ukuleles, by Atty. Charlie Yu and all sales division heads. Through these gifts, Empire East hopes to inspire the kids to continue singing and use the gift of music to also give back to the community.

Special awards were also given to those who went beyond the ordinary and exerted extra effort to dress-up for the event. These are under six categories: two for male, female, and the general bracket. One winner of a 45-inch flat-screen TV was also drawn in the grand raffle draw.

To wrap up the event, the winners of the chorale competition were announced with JNS Division bagging the 2nd place, NCE Division for the 1st place, and MITHRIL Division securing the grand prize as the overall champion.