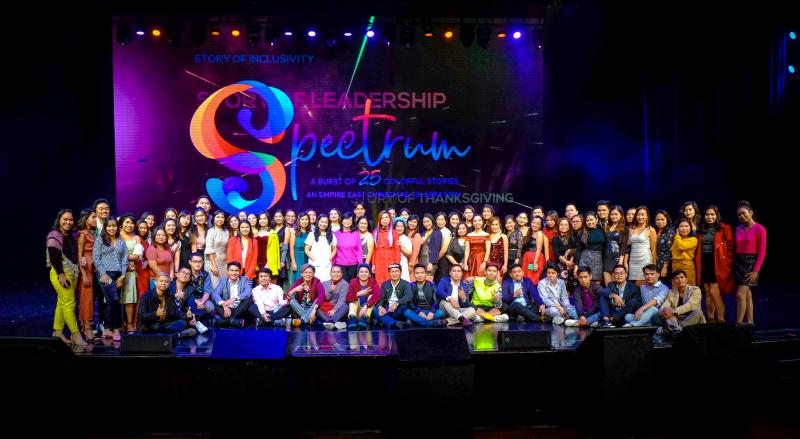 Event
-
Empire East celebrates 25 years with a SPECTRUM of activities.

Pasay City, METRO MANILA - Real estate innovator Empire East culminates 2019, which marks its 25th year in the industry, by retelling its colorful history through 25 stories of commitment and passion in building unparalleled communities, and by highlighting the more than 25 corporate social responsibility (CSR) projects it completed this year.

The 690-employee strong Empire East held its annual Christmas party by having its liveliest celebration yet entitled "SPECTRUM: A Burst of 25 Colorful Stories," at the Newport Performing Arts Theatre last December 9.

A Surprise Visit from the Founders

Megaworld Founder and Empire East Chairman Dr. Andrew L. Tan, with Board Director Mrs. Katherine L. Tan, graced the event much to the employees' surprise to express their support for their causes.

He then pledged a Php2M seed to help the company start bigger and better programs for the youth, the elderly, displaced families, education, environment, and community health — all under "Empire East Cares," the official CSR arm of the company.

"I thank you all for keeping the flame [of helping] alive," said Dr. Tan. "I fully support your dream to help others."

The Empire East Cares program is strongly inspired by Dr. Andrew Tan's unwavering support towards communities through the Megaworld Foundation.

As part of the company's commitment to building unparalleled residential communities in its 25th year, led by its President and CEO Atty. Anthony Charlemagne Yu, it envisioned to reach out to 25 communities through pocket CSR initiatives. By the end of this year, the company, through the personal contributions of its employees, was able to exceed its goal of up to 33 acts for different people in and beyond Metro Manila.

Other than inspiring corporate action from the company, Dr. Andrew Tan's vision of service has also touched the hearts of individual Empire East employees into conducting their own CSR initiatives apart from the ones initiated by the company.

"To live a life for others is one of my greatest missions in life. And being able to help people in need, even in small ways, warms my heart," said Debbie Yabut, who conducted a few charity events in the benefit of people in need. "I know that one small act could make a difference, and I'm glad to be part of it."

A Burst of Colors through Raffles and Showdowns

Empire East celebrated the colorful lives of each department in the most expressive way it knows -- a dance showdown! Employees went all-out in a competition that drew excitement and camaraderie from each team as they creatively showcased routines and props to suit their assigned concepts.

Of course, because we were telling the story of giving, employees were also at the edge of their seats as they await major raffle draws, which gave away gadgets and grand cash prizes for the enjoyment of its winners.

Altogether, the Empire East employees make up the brightest spectrum of colors through their own unique skills and contributions to the company. While each department may be different, the company unites to achieve a common goal - to create communities that reflect the love and care they have for each other in Empire East.