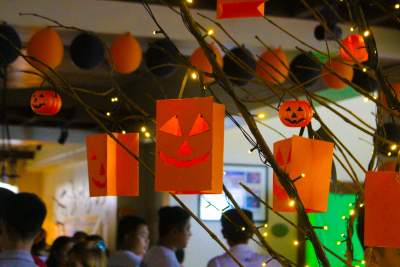 PASIG CITY -- It’s that time of the year again when characters from different movies, TV series, and comic books come to life. To fire up the Halloween season, kids walked down the runway at the Cambridge Village in Pasig-Cainta with their best Halloween costumes last October 26, 2019.

The program started with a doxology followed by an introduction to the activities. While some dressed up as their favorite cartoon characters from hit television shows, some showed their prowess as famous superheroes from DC and the Marvel Universe. Each of them owned the red carpet as they flaunted their costumes, huge head-dresses, and feisty make-up.

Part of the activity was a series of games that the kids and even their parents enjoyed. The party was hosted by their ‘ates and kuyas’ from McDonald's, who doubled up the fun by giving exciting treats and prizes.

As the end of the program approached, the winners of the Best in Costume Award were announced. A boy dressed as Iron Man bagged the grand prize with his ultra-extra wardrobe and headpiece. Truly, this little guy stood out among his peers. With the help of their parents, it is evident how the kids poured their efforts for their annual trick or treat party.

After the announcement of winners, the homeowners who registered for the program got to enjoy a quick photo booth session alongside the distribution of meals for the kids.

For years, it has been a tradition for some of the Empire East communities to conduct a Halloween activity for its homeowners. The residents get to organize and have fun through various activities within their community, which future homeowners could also enjoy!

You, too, can join the fun and live in a community that outgrows and goes beyond the ordinary to offer an ultimate city living experience exclusively for its homeowners! Discover your best home option in the city with Empire East! Call 8810-3333 or visit www.empire-east.com for more details.