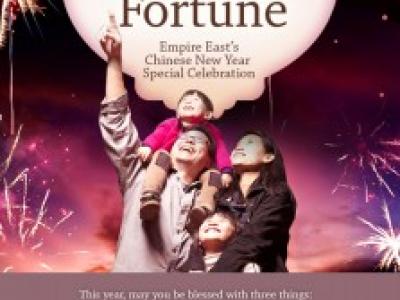 News
-
Triple your Blessings this Chinese New Year with Luck, Home and Fortune

Manila, Philippines - With a growing number of Filipino-Chinese living in the country, the Chinese New Year has been widely celebrated, even making its way into the country's holiday list each year. With more establishments getting twice as creative and festive as before, such as Binondo's shopping centers like Lucky Chinatown as well as Eastwood City in Quezon City , which are both owned and operated by a Filipino-Chinese, the Chinese New Year has been made into an occasion of family bonding and celebration.

Andrew Tan-owned real estate developer Empire East is no exception, which ceaselessly invites Chinoys and Pinoys alike to its yearly CNY festivities. But apart from the traditional dragon dances made popular on the streets of Ong Pin, Empire East opted to celebrate by offering investment opportunities to interested parties. This year, the company's CNY celebration revolves around its theme based on three blessings: Luck, Home and Fortune, which strengthens its claim that owning a new home will be the start of the creation of this “triangle of luck” for this year and beyond.

“Empire East specializes in offering high-end homes at the most strategic locations in Metro Manila. No matter which angle you look at it, owning a very accessible home is great for business because it means having to immediately attend to your business' needs. It is also closer to schools, which brings good luck to our children who aim to achieve more in their schoolwork. It is also very fortunate for working individuals to be driving to and from work easily because their homes are truly close to their workplace”, says Empire East president and CEO Atty. Anthony Charlemagne C. Yu, as he talks about the company’s Transit-Oriented Developments (TODs) or properties directly connected to major transit systems like MRT-3 and LRT-2.

This coming CNY event aims to give families a chance to recreate this New Year and make big decisions as a family.” says Yu.

The event is set on February 8, 2016 at the following locations: Empire East’s site showroom between 8:00AM to 7:00PM at Pioneer Woodlands, EDSA cor. Pioneer St. Mandaluyong City. And in all of Empire East’s mall showrooms between 10:00AM to 9:00PM at SM San Lazaro, SM North EDSA, SM Sta. Mesa, SM Megamall, Alimall and Gateway mall.

Through the years, Empire East has successfully brought luxury living at an affordable price to every homemaker and businessman. To know more about Empire East and their pre-selling condominiums, contact us at 810-3333 or like us on facebook at https://www.facebook.com/empireeastofficial. You make also follow twitter.com/empireeast and instagram.com/lifeisatempireeast.