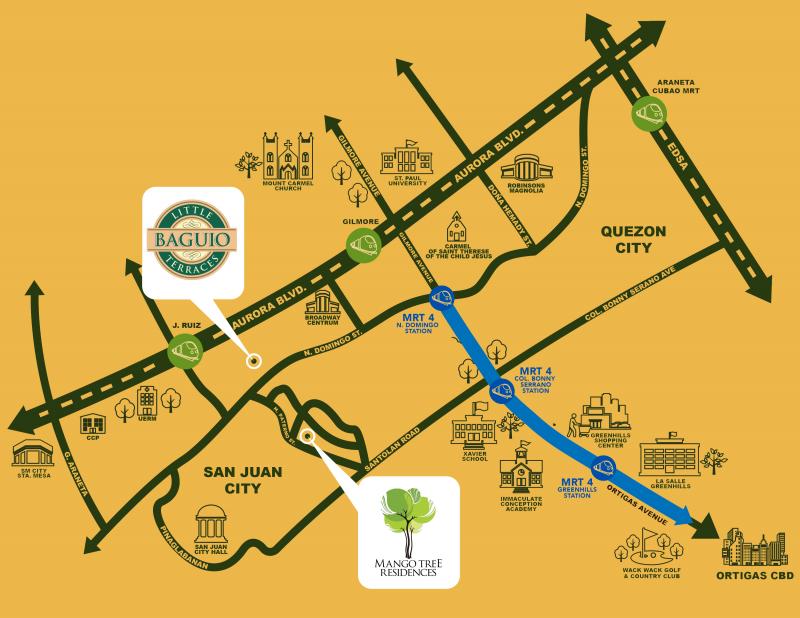 News
-
Property Values Seen to Rise in N. Domingo Area Due to MRT-4

Nicanor Domingo Street, more simply known as N. Domingo, is an approximately 3.3-kilometer road traversing San Juan City and Quezon City. Almost parallel to Aurora Boulevard, this street is teeming with commercial establishments such as supermarkets, restaurants and other businesses. Historical landmarks including the San Juan Bridge and Pinaglabanan Shrine can also be found here.

Today, N. Domingo Street serves as a major thoroughfare where public utility vehicles pass by, such as jeepneys to Cubao, Manila and Mandaluyong, and buses with Quiapo-Cainta-Taytay route. Many private car owners also drive along N. Domingo, especially those living in the exclusive subdivisions of New Manila and Greenhills, as a shortcut going to their offices or their children's schools.

Recognizing the centrality of N. Domingo Street, Empire East started the trend of building mid-to-high-rise condominiums around the area. Even before the full operation of LRT Line 2 in 2004, it already completed the one-tower Gilmore Heights and four-tower Xavier Hills at the N. Domingo and Granada intersection, both short walking distance away from LRT-2 Gilmore station. Soon after, major real estate players have also developed their condominium projects in this area.

Faster Transit in the Future

As we welcome the new decade, we also welcome an exciting news that will definitely reshape N. Domingo Street and its surrounding neighborhoods. The Philippine government recently announced its approval of the construction of MRT Line 4 which will have a terminal station at N. Domingo St. near Granada St., few steps from LRT-2 Gilmore station. This 15.56-kilometer rail-based system will travel along Ortigas Avenue, Ortigas Avenue Extension and Taytay Diversion Road, connecting key places in Quezon City, San Juan City, Mandaluyong City, Pasig City, as well as Cainta and Taytay in Rizal.

Upon its completion by 2025, its projected initial daily ridership of more than 230,000 people will enjoy a faster and more convenient commuting experience to the Ortigas Central Business District, and even to the renowned thrift shopping destinations in Greenhills and Taytay. Aside from its accessible link to LRT-2, it is also planned to converge with MRT-3 and the upcoming Mega Manila Subway.

With all these developments materializing in a few years, today is undeniably the best time to invest for real estate properties with close proximity to such infrastructures. Empire East offers aspiring homebuyers excellent options for investment, both near the upcoming MRT-4 N. Domingo station.

Should you opt for a ready-for-occupancy home with easy-to-move-in payment terms, there is the four-tower Little Baguio Terraces right along N. Domingo Street, which is only less than 600 meters away from the future MRT-4 station. This mid-rise condominium project has been a top choice of parents who want to send their kids to premier schools in Manila and Quezon City's university belts, as it is walkable to J. Ruiz and Gilmore stations of LRT-2 from its gate along Aurora Boulevard. In the near future, when these students eventually graduate from college, they could also have the option to conveniently travel to their workplaces and other vital city hubs via MRT-4.

When the first tower of this Transit-Oriented Development (TOD) was launched to the market way back in 2007, the condominium units were sold at an average price of PHP 77,000 per square meter. To date, the 30-square-meter two-bedroom units and 60-square-meter three-bedroom combined suites are valued at almost PHP 140,000 per square meter, earning a remarkable property value increase of nearly 80%. Real estate values in the area are projected to increase more when the proposed MRT-4 becomes operational.

Another investment option for real estate property seekers is the two-tower Mango Tree Residences along M. Paterno Street, adjacent to N. Domingo Street, and roughly a kilometer away or a less than 10-minute walk to the upcoming MRT-4 N. Domingo station. Since it is currently under pre-selling stage, buyers can avail a studio, one-bedroom or two-bedroom suite at no down payment and zero interest flexible schemes.  Now in full-swing construction, its price value already appreciated to 45% from its introductory price of PHP 100,000 per square meter several years ago, and is expected to appreciate more in the coming years.