Sustainability is more than just a buzz word for property developers; it is now the new standard and the way forward. Those who can create sustainable buildings have the potential to be their location’s next landmark, with interest from property seekers–whether residential, corporate, or a mix of both–skyrocketing to unparalleled heights.

The way to measure sustainability in the Philippine setting is not as cookie-cutter as what one would expect from buildings overseas. In the Philippines, there is a lot to be considered, with our unpredictable climate, changing lifestyles, and growing need for globalization. What used to be sprawling cities have now been transformed to high-rises with pockets of greenery that keep them connected to the community. They benefit the community and bring jobs, but when designed with profit instead of the people in mind, they pose a risk to the environment.

As more developers rise to the challenge of creating green developments, it is not a surprise to see buildings that mimic great structures from other countries, as they have set their eyes on sustainability earlier than Philippine real estate developers could see their green developments break ground. Thankfully, we are catching up–fast.

This is what Empire East proved with the use of resilient design in their developments. They have always built for people, and their past and future developments are proof of how important sustainability is for them. Empire East’s portfolio of properties is already filled with features that keep them at par with the global standards on sustainability.

As early as conceptualization, architects and developers already determine the human elements that need to be included in the structure for it to be deemed sustainable. This means thinking of basic human practices and needs, and designing spaces that address them not just for occupants to function, but to do so in their most productive state.

Out in the streets, pollution makes humans susceptible to health problems. In a sustainable building, indoor air quality is controlled to meet stringent standards, all to provide every human occupant the fresh, filtered air that will not impede their productivity due to airborne illnesses.

Empire East knows that to comply with sustainable building practices, they have to start with air quality. This is why most of their condominium projects, namely, The Rochester, Pioneer Woodlands, Covent Garden, Mango Tree Residences, The Sonoma, Kasara Urban Resort Residences, and The Paddington Place are compliant with stringent airtightness and moisture protection. Each property also uses non-toxic materials, a further step to make sure occupants breathe only fresh air and no toxins.

All buildings also have large operable windows to help in proper ventilation especially inside the residential units, ensuring that occupants are not subjected to stale air, which may be circulating air that is heavy with moisture, dust and debris.

Understanding the Importance of Recycling

Water, too, is a basic need for humans, whose very own bodies are made up of 60-65% water. Humans lose water in several ways, and the body needs that water replenished to stay hydrated and functional. Water is also used in most activities, from cooking, bathing, cleaning the house to doing the laundry.

In the Philippines, the year can either be marked with water shortage or flooding. El Niño and La Niña years make living difficult because of the challenges each phenomenon poses. Add to this the wasteful practices in each household and you have a country that needs to be introduced to recycling as a standard feature instead of an optional amenity. So much water can be wasted if it is not utilized effectively, and this results in depleting our natural resources.

Empire East’s Kasara Urban Resort Residences in Pasig City and The Paddington Place in Mandaluyong City are equipped with water recycling facilities to give water a new lease on life, recycling it and reusing it for planting as well as for cleaning, therefore further benefiting its residents.

The two developments go further in terms of recycling other than water, as they also have a material recovery facility (MRF). Other Empire East properties with this feature are The Rochester in Pasig City, Pioneer Woodlands in Mandaluyong City, Covent Garden in Santa Mesa, Manila, and Mango Tree Residences in San Juan City. These facilities strengthen the drive among the homeowners to properly segregate trashes and recycle waste materials.

The human body has a natural clock, the circadian rhythm, that attunes us to the natural light changes of every day. This is the same mechanism that wakes a person up in the morning with the daylight and, with less light at night, prepares the body for sleep. What sustainable buildings have found is that natural light is at the crossroads of energy-efficiency and productivity: a building that can utilize natural lighting can reduce its energy consumption while also improving the performance of its occupants.

All of Empire East’s buildings come equipped with features that take advantage of natural daylight precisely because of this knowledge, and to take it a step further, The Rochester and The Paddington Place both have occupancy sensors that are strategically located for lighting control. The Sonoma, Kasara Urban Resort Residences, and the Paddington Place also have right sizes and numbers of windows inside the units and in the hallways to make full use of natural light at strategic times of the day.

Workplaces and residences these days understand the need for open spaces as a way to achieve work-life balance, to manage stress levels, and to live a productive life that will not make them slaves to absenteeism or presenteeism.

When one looks at sustainability as a way of life, its benefits in other areas of life and work become apparent. The main goal of sustainable buildings is to build without destroying the landscape. More than that, when developers create properties that can be one with nature in beautifying the landscape, they also satisfy the basic needs of its occupants. In homes, bringing the outdoors in makes living more in tune with nature and, in effect, less stressful.

Knowing this, it only makes sense that Empire East’s The Rochester, Covent Garden, Mango Tree Residences, The Sonoma, and Kasara Urban Resort Residences allow their occupants to enjoy the outdoors through open space utilization. Instead of leaving open spaces to be beautiful sights enjoyed behind a glass door, Empire East encourages residents to go out, be active, and relax. 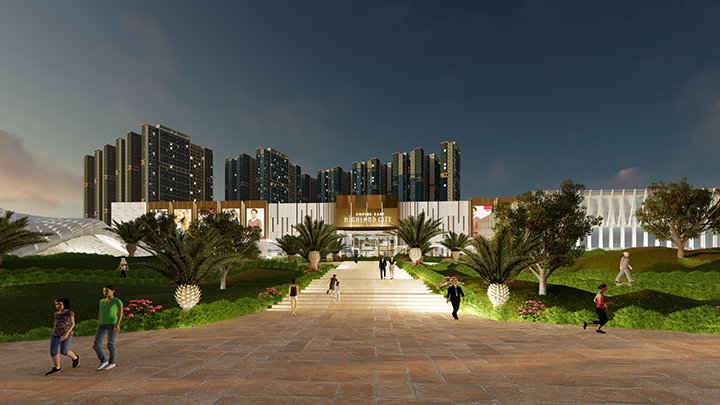 Even before sustainability became the talk of the town, Empire East has already been making efforts to make their buildings with sustainability and livability in mind. Their efforts have resulted in the construction of several landmarks that are now some of the most sought-after properties for raising a family and for those who want to be near transportation options.

But Empire East is not done. There is still more to be achieved in the sustainable front, which is why they have committed to sustainable roads with the rise of Empire East Highland City along the major thoroughfare of Felix Avenue in Pasig-Cainta area. Buildings and residential properties with sustainable features are now the standard; the next step is to connect them through sustainable roads.

From the tree-lined path greeting residents at the entrance of the development, it is apparent that Empire East Highland City has left no stone unturned in developing its most sustainable project yet.

Empire East Highland City is planned to have the features that will benefit their residents. The developer is considering adding an expansive green park and more trees to its sustainable roads as a way to provide fresh air and make the location more resilient to flooding. For now, plans include a jogging path touted to run about 1.6 kilometers, enabling individuals to walk around and add some physical activity to keep the blood flowing. Bike lanes will also accommodate trolleys, scooters, and bikes so that those who need to move faster without contributing to greenhouse gas emissions can travel safely and conveniently.

It is important for any sustainable structure in the Philippines to consider its local climate and the challenges the daily weather may present. On the days that the Philippines receives a bountiful supply of sunshine, Empire East Highland City’s solar-powered street lights will be recharged and later prove useful, and on rainy days, its rainwater collection system will come in handy. Empire East is also considering the use of non-typical area drains after further studying how effective it is in improving the development.

Empire East will address their residents’ need for effective transportation methods by providing a Citylink bus station in one of the towers. This will benefit the homeowners who work in nearby central business districts, as well as residents looking to cut their commuting time significantly. Sustainability is not just anchored on natural elements enriching the lives of residents; it is also a practice that considers the safety of its people in the middle of all the pollution and unpredictable calamities. Resilient design, juxtaposed with climate-responsive features, allows Empire East Highland City’s residents to feel safe even in the Philippines’ infamous typhoon months.

The towers will also use LED lights for the common areas of the towers, and LED screens instead of tarpaulins. All of Empire East Highland City will also use low VOC paints to prevent the release of harmful chemicals in the air.

Empire East goes beyond sustainability in their latest project, Empire East Highland City. With a sustainable road network, residents get more benefits they already get from a sustainable community–even as they move around. For further information about the projects of Empire East, you can call (02) 8810-3333 or email inquiry@empire-east.com.

This article originally appeared on lamudi.com.